What Are Differences Between Trombone vs Trumpet in The Brass Family?

We usually see trombone vs. trumpet at marching bands and musical compositions, but not many people know their background and characteristics of each musical instrument as well as set them apart.

Apparently, trumpet and trombone are two instruments in the brass family that produce sound louder than any other in the orchestra and can be heard from a far distance.

They play an integral role in creating harmony and supporting the rhythm at the concert.

In previous times, trumpet and trombone were made of such a variety of material like wood, tusks, animal horns, or shells; nevertheless, now they are mostly made of brass

It is essential to have fundamental information about trumpet: its history, features, role, and types.

The trumpet has a long history. Musicians claim that trumpet was first used as alarms for group hunting and military signals in 1500 BC.

The 14th and 15th century marked a milestone in its development when the trumpet was officially played as a musical instrument.

It had a significant change in design and material during the Middle Ages and Reconnaissance.

Up to now, both listeners and musicians have favored it. The modern trumpet is a common instrument at the concert.

People usually combine trumpet with art music styles. It means that this musical instrument is often played in popular music types such as orchestras, concert bands, and jazz ensembles.

Normally there are 2 to 4 trumpets in an orchestra. Although trumpet is the smallest instrument in the brass family, it plays the highest pitches with such an amazingly vibrant sound.

There are various kinds of the trumpet in the modern music. The most popular trumpet is the B♭ trumpet, but others like A, B, C, D, E, and E♭ are also available.

The C trumpet is commonly used in the USA. Meanwhile, piccolo trumpet is the smallest one. 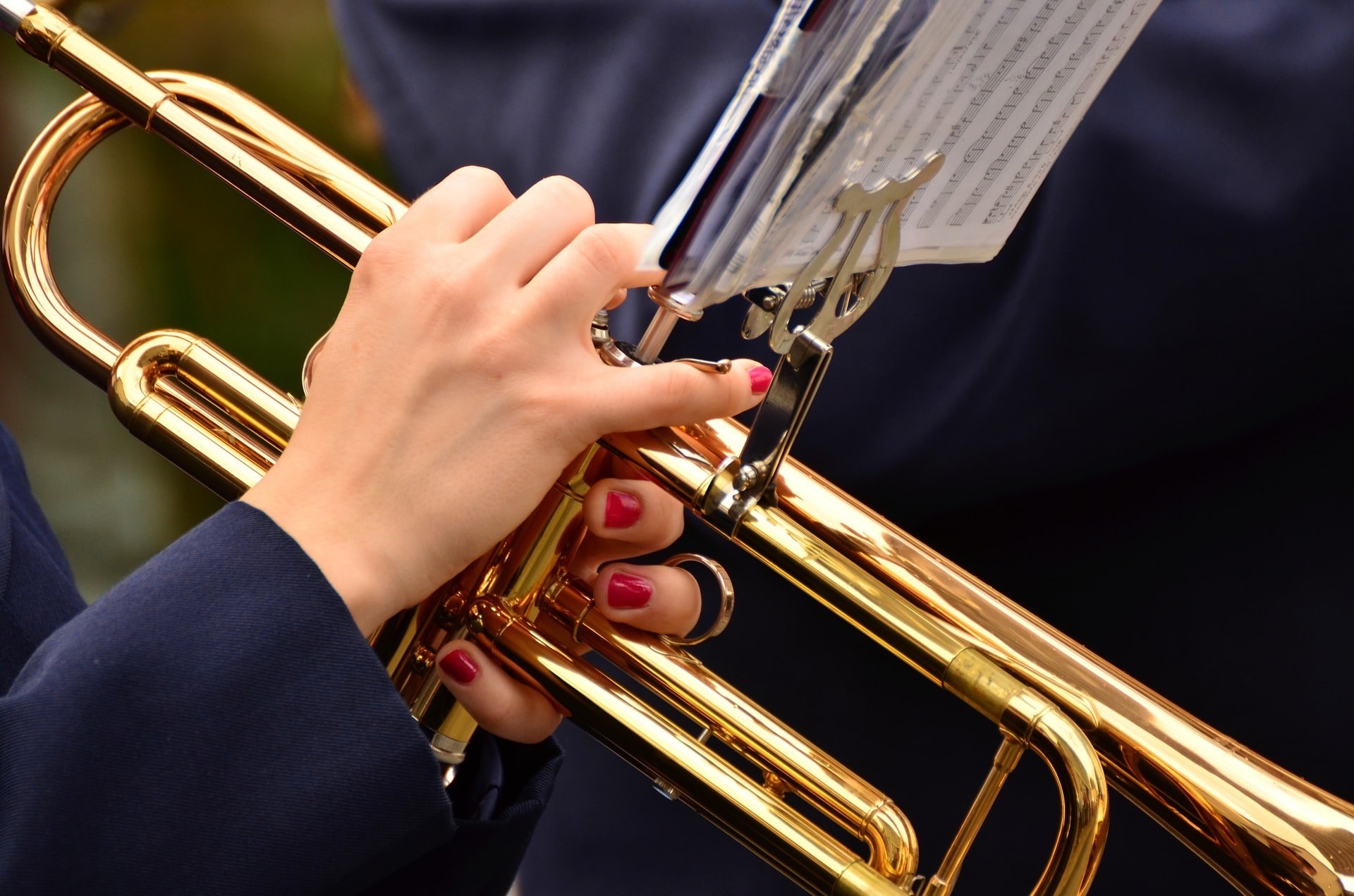 The modern trumpet has the shape of a brass pipe connected with a tube and three valves. Surprisingly, these valves can play 45 different notes.

The trumpet has a cylindrical bore. Therefore, if we stretch out the full length of a trumpet would be around 3.5 feet long.

The use of the tuning slide in the trumpet can lower or increase the pitch according to the intention of the player.

The buzzing sound is produced by the air blown from your lips into the mouthpiece.  To use the trumpet properly, you have to hold it horizontally and combine three valves simultaneously.

There are various kinds of the trumpet in the modern music. The most popular trumpet is the B♭ trumpet, but others like A, B, C, D, E, and E♭ are also available. The C trumpet is commonly used in the USA. Meanwhile, piccolo trumpet is the smallest one.

Read more: Know the Parts of a Trumpet

Though being in the brass family like a trumpet, the trombone has its distinguishing features.

The trombone is a word deriving from Italian – “tromba” which means a big trumpet.

Before being called officially as trombone, during the Renaissance time, it had different names such as: “sacabuche,” “saqueboute,” or “shakbusshe.” In the 1800s, the trombone was used in an opera overture.

In the 20th century, trombone still maintained its important role in the orchestra with prominent parts in works.

Since then, many brilliant musicians and composers showed their great favor for this musical instrument, and it gained popularity in music. 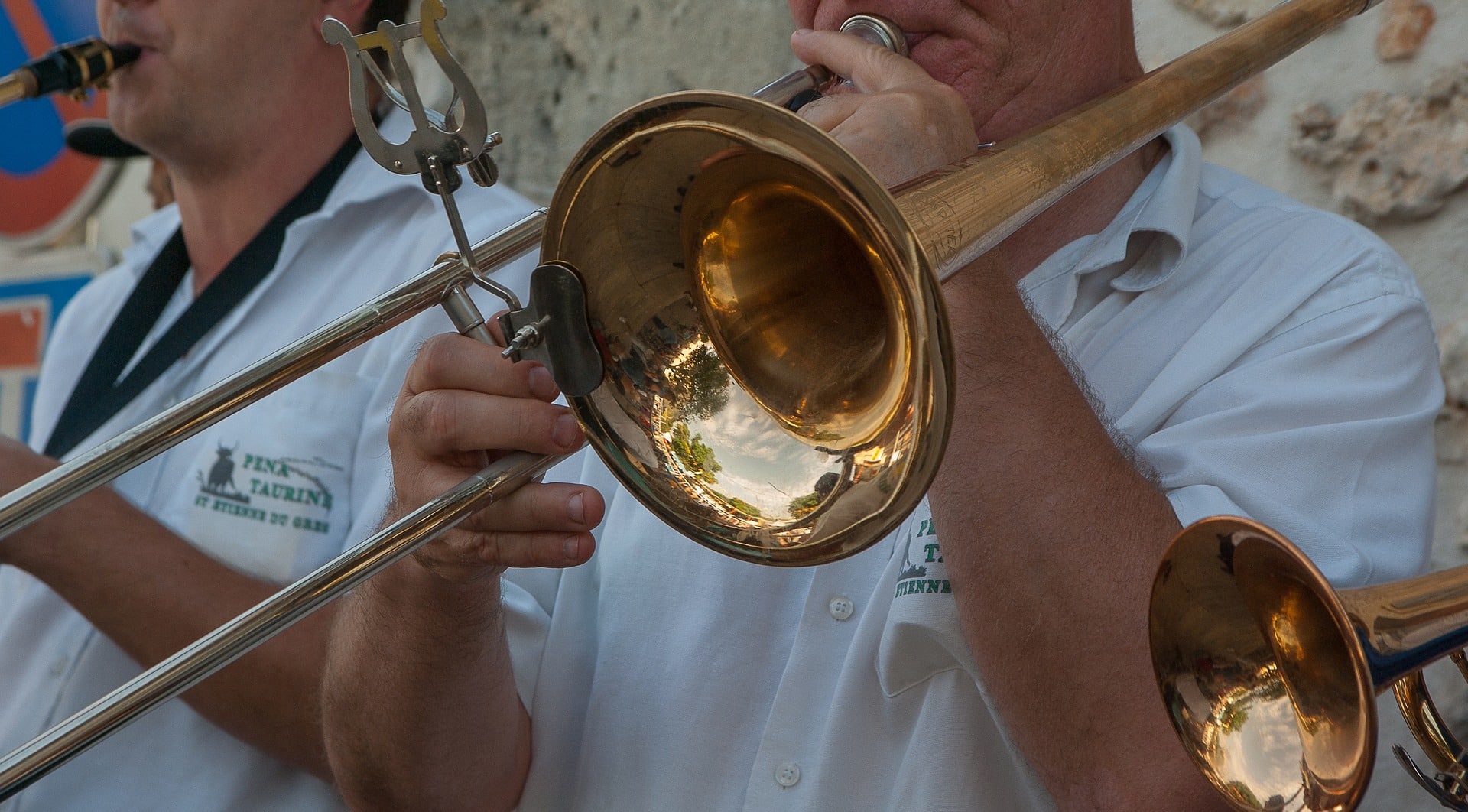 Similar to trumpet, the trombone is very important in art music styles. However, the main role of this instrument is to produce bass sounds in the orchestra.

There are usually three trombones in the orchestra, and they play pitches in the same range as the cello and bassoon. These can create harmonies together.

Different from others in the brass family, the trombone is the unique instrument that changes the pitch from a slide, not from valves.

Regarding its appearance, at first glance, it may look like a trumpet. Nonetheless, it consists of two U-shaped pipes connected at the opposite ends to create “S” shape.

The entire length of trombone’ s pipe can change flexibly because one pipe slides into the other.

The length of a standard trombone can be larger as nearly three times as that of trumpet (9 feet).

Like a trumpet, the buzzing sound of trombone also comes from the mouthpiece but to change the pitch; the player has to push and pull two pipes of seven distinct positions. 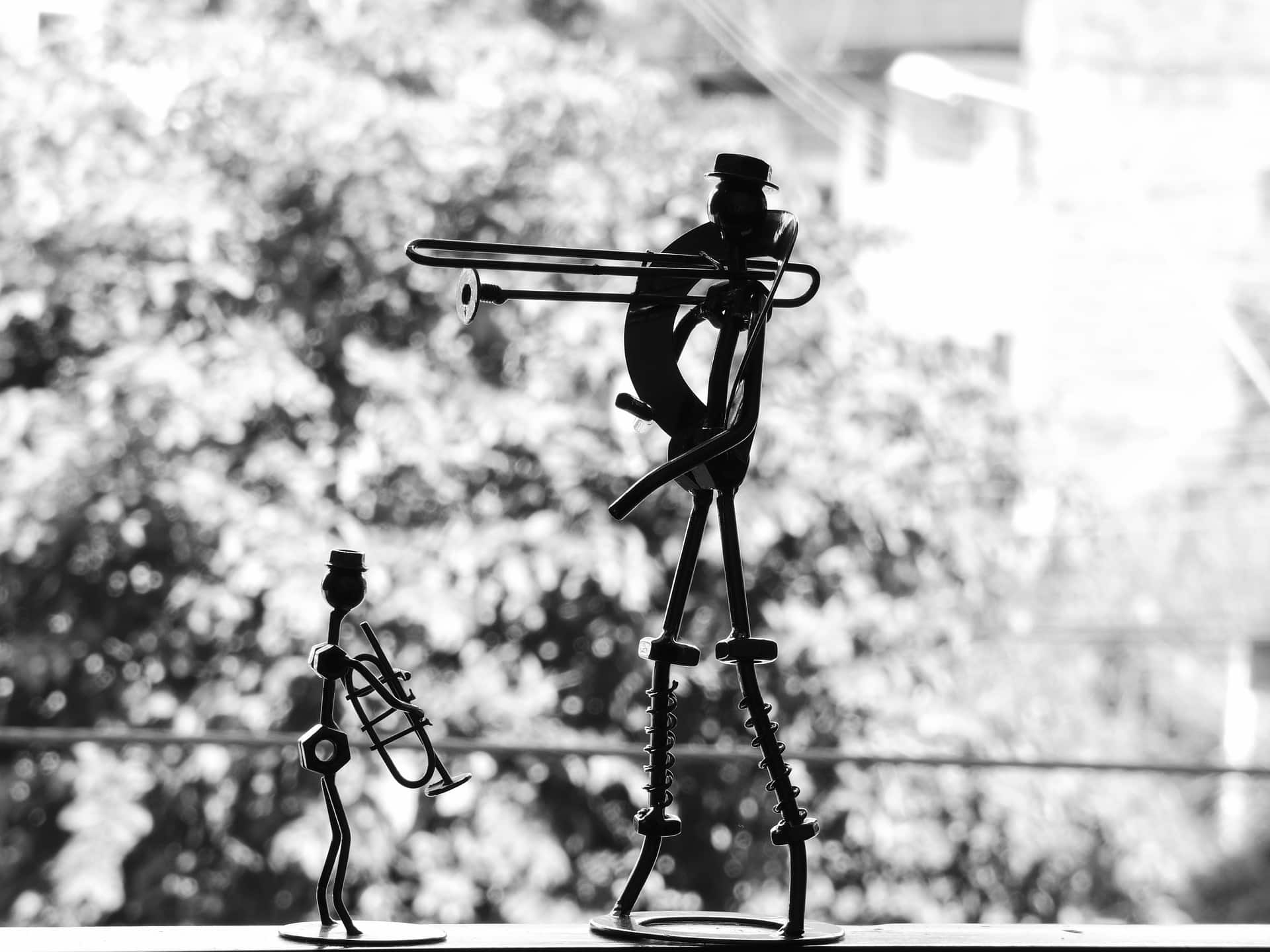 Tenors in Bb, Tenor Bb/f or Bass Trombone are popular kinds of the trombone.

Additionally, Alto Trombone (which is pitched higher than a Bb Trombone) is also available. The most popular types of trombones at present are the tenor and bass.

How Can We Distinguish Trumpet vs Trombone?

Even though trumpet and trombone are two musical instruments in the same family – the bass family, it is not difficult to set them apart.

Understanding the difference between trumpet and trombone is good for manipulating the pitch appropriately.

There are 5 criteria that can help players distinguish trumpet vs. trombone.

The most striking feature setting apart trumpet vs. trombone is size. This can be done by our normal eyes.

Obviously, as mentioned above trombone is bigger than a trumpet, more or less 7 feet long compared with 9 feet long respectively.

Moreover, the trumpet is the smallest instrument regarding size in the brass family.

The second difference between trumpet and trombone is a function of slide and valves in changing the pitch.

To trumpet, valves are referred as the spirit of this instrument as it can increase or lower the pitch; meanwhile, to trombone, the transition of slides in two pipes is to change the pitch.

Besides, valves of the trumpet are manipulated by the use of three fingers on the right-hand side while the slide of the trombone is implemented by two hands combination. 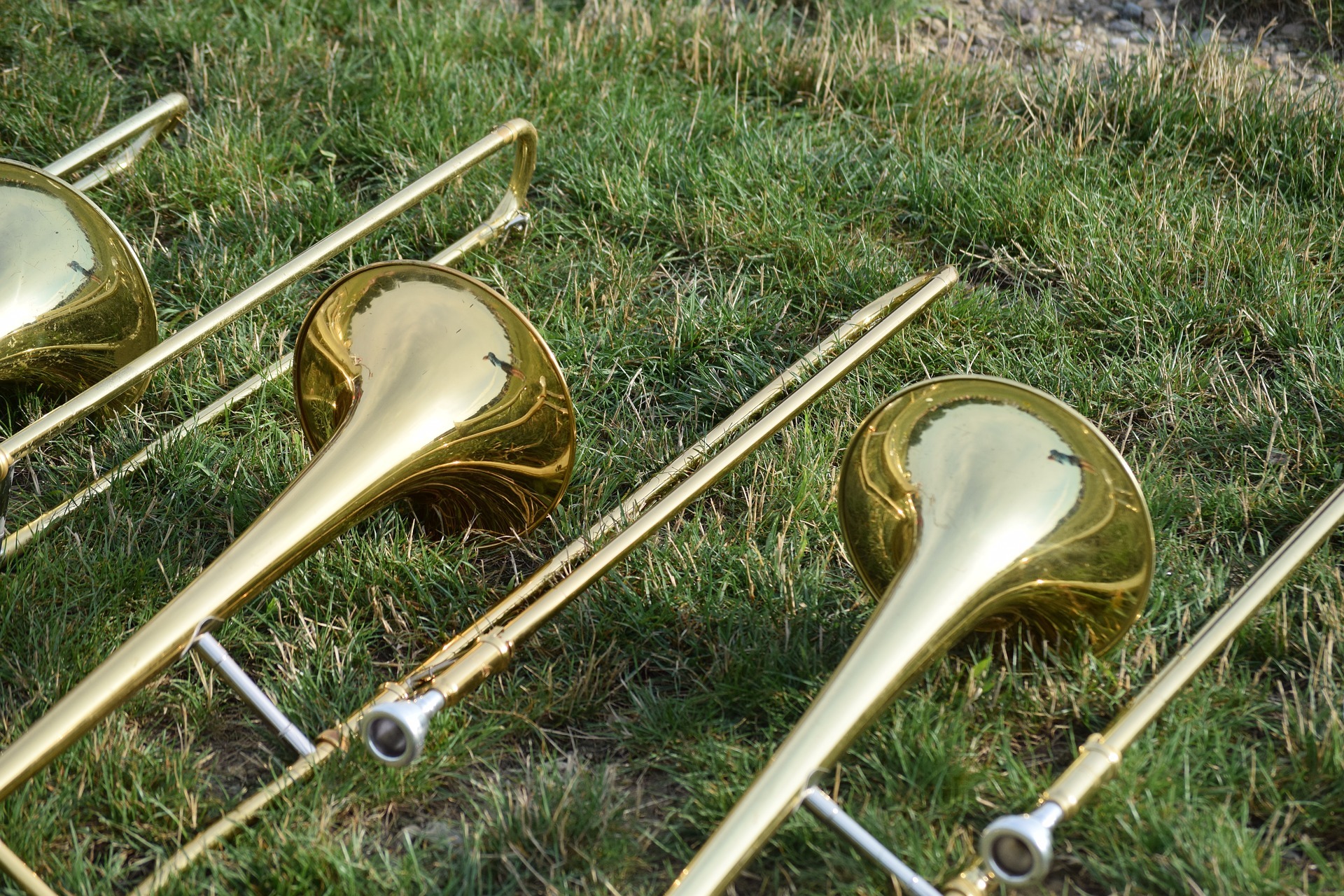 Another difference between trombone vs. trumpet is the height of pitch. Many people hearing two above instruments at the first time will find it difficult to indicate the difference.

Musicians consider trombone as a low brass instrument. This means it produces lower pitch than others in the brass family.

It sounds irrelevant, but in fact, two above instruments require different ways of maintenance. Cleaning trumpet seemingly is easier than a trombone.

To properly maintain a trumpet, the valves should be regularly oiled at least 3 times per week, and the instrument should be wiped down after each use.

Parents may wonder what they should choose for their children to play. If your children show their favor of musical instrument, trumpet and trombone are best choices.

Many people misunderstand that trumpet is easier to play than a trombone. However, each instrument requires different skills.

In fact, if you want your children to take part in the orchestra as soon as possible, it is better to teach them how to use trombone.

A lot of musicians and composers highly recommend it for gifted players.

What Is The Largest Instrument In The Brass Family?

When talking about the brass family, it is a must to mention tuba since this instrument is the largest one.

Many musicians and composers consider tuba as a grandfather of the brass family. Like most other instruments in this family, the tuba has a long pipe which is curved into an oblong shape.

The  is the lowest brass instrument. It plays an important role in anchoring the harmony.

The average size of a tuba ranges from 9 to 18 feet. In fact, its size is long, but its sound is quite low.

The length of tubing in tubas may reach 16 feet.It is a norm that there is one tuba in the orchestra. Its role focuses on playing the harmony.

There is a bell in front of you when playing the tuba. To play this musical instrument, you have to blow the air from the mouthpiece and use its valves properly and flexible.

Making sound by a tuba requires much of breath and vibration from the throat.

Trumpet and trombone are two outstanding musical instruments in the brass family.

Both of them produce buzzing sounds from the mouthpiece, but they have several differences regarding size, pitch, maintenance, slides and valves, and demand.

Demand can bring the answer for the question “Should the player play trumpet or trombone?”

In reality, if parents want their children to take part in professional music, choosing trombone is a more favored option. Noticeably, the tuba is the largest instrument in the brass family.