How Do Record Players Work: Things You Must Know

In recent years, record players have gained a lot of popularity. With the introduction of CDs and DVDs, it seemed like it was the end of records and record players.

During the 90s, the sales of records were at an all-time low. And as for the record players, no one even bothered to buy them. Simply put, they were seen as a thing of the past.

But as time moved on, things started changing. When everything became accessible – it stopped being interesting.

People had all the music in the world on their hard drives, but the feeling of listening to music was changed. Record players slowly started getting back.

But it wasn’t only that. What’s even more important is the quality of sound. New music devices were neat and mobile, but they lacked the most important thing – overall quality of audio output.

Record players have remained the best devices for listening to music. The reason for this is the way music is recorded.

On vinyl, music is recorded with kinetic energy, and it is still best than any kind of digital recording. These days, record players are more popular than ever. People buy them, and prefer listening music on them.

In this article, we will learn how record players work, and how you can buy a good record player for yourself. Let’s begin!

The History of The Record Player

What can be seen as the first record player was made in 1877. That device was called the phonograph, and it was invented by Thomas Edison. This was a device that would change the music industry forever.

The phonograph can literally be translated as “the writer of sound”. It consisted of a wood cylinder, which had a thin foil around it. Also, there was a horn attached to the device, and a metal needle.

The sound from Edison’s voice would go through the horn, and vibrate. The vibration would then transfer via the metal needle onto the sheet of foil. The cylinder was moved by rotating a handle, to give it kinetic energy.

Depending on the strength of the voice, the needle would press harder or weaker onto the metal sheet. That way, sound was preserved.

As for the playback, you would simply put the needle at the start and move the handle of the device. The sound would transfer from the needle to the horn, and out into the air.

This concept was so groundbreaking that it immediately caught the attention of the whole world. The quality of sound wasn’t very good, but for its time – it was nothing short of amazing.

But Edison didn’t stop there. Ten years after he’d made the first phonograph, he upgraded the idea. He replaced the metal sheets with wax cylinders, enabling the phonograph to record several minutes of sound. In the early XX century, 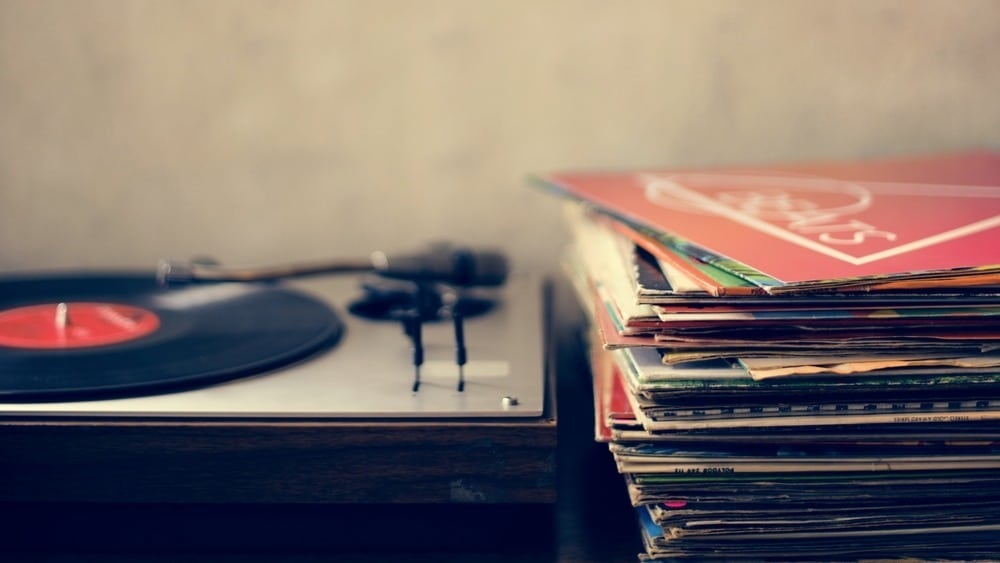 Emile Berliner improved upon this idea, removing wax cylinders with flat discs. This was the end of the phonograph, but the birth of the record player.

The whole idea of listening to music was changed in a matter of few decades. For hundreds of years people had to go and find live musicians. Now, they could simply buy a record player and listen to music in their own home.

Soon, the music industry began developing rapidly. There were all kinds of music records. The record players dominated the whole of XX century, until the introduction of digital music devices.

The interesting thing about record players is that they haven’t changed that much from their beginnings. A present-day record player is very similar to the device Edison invented.

However, there is one major difference between the old gramophone and modern record players. Gramophones used the big horn to amplify the sound coming from the music sheet. Therefore, it was purely mechanical energy. 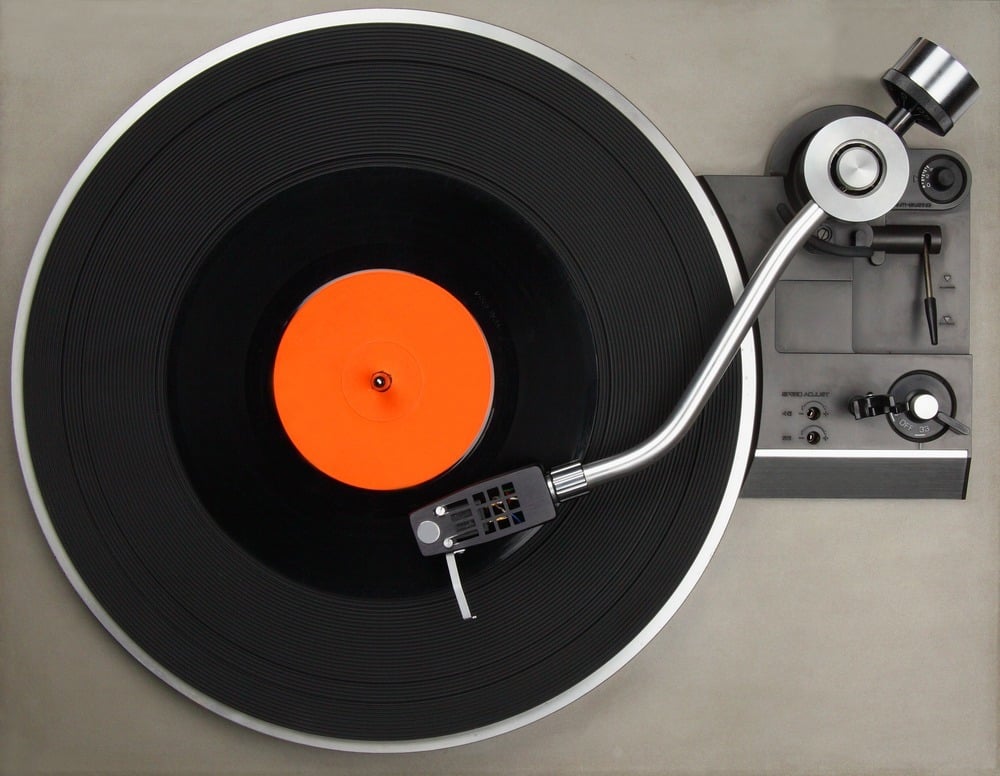 Parts of a Record Player

Now we’re going to look at the specific parts of a record player, and analyze their function.

When you take out a record, and put it onto a record player – it won’t work until you put a needle onto it. Now, the needle is what most people call this part of the record player. But the real “needle” was a part of Edison’s phonograph.

The technical term for this part is actually – stylus. The stylus is a small piece of diamond that touches the grooves on a record.

When the record turns, the stylus transmits the vibrations from the record, through the metal bar, onto the magneticcartridge. This part is also known as the pickup, but this is a colloquial term. The stylus on the cartridge can be permanent, but also removable.

The cartridge is made up of several parts, with the stylus being the part that interacts with the record. The other parts are the cantilever, magnets and coils. When the stylus picks up the vibrations from the groove, they are transformed through the coil.

Next, there is the headshell. This part holds the cartridge in place, and connects it to the tonearm.

The tonearm is a long (straight or curved) metal bar that connects the headshell with the body of the record player. The cueinglever is the part with which you move the tonearm and place the stylus in its place. 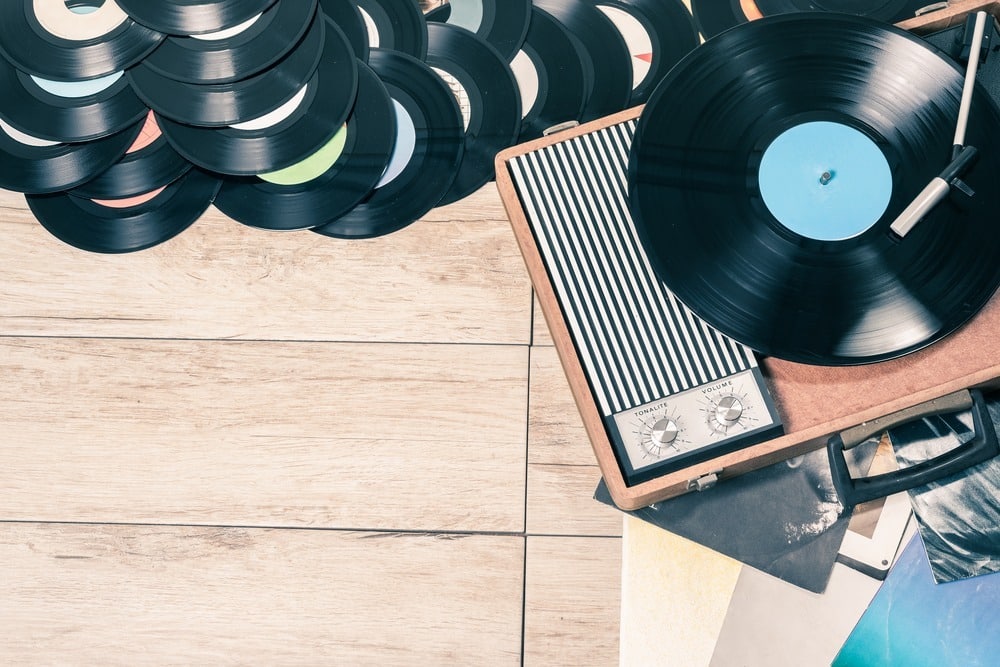 So, be sure to always do it – without exception. There are also automatic record players. They don’t have a tonearm. Instead, you simply press a button and the tonearm positions itself onto the record.

The platter is the essential part of the record player. This is the part on which you place the record to spin.

The platter usually comes with a mat, which serves as a small buffer between the record and the platter. The mat is very useful, because it enables the record to have a good grip, and it also reduces all kinds of vibration.

It is very important to set the speed of the platter right. The speed has to be the same as the speed cut of the record. Otherwise, the record won’t play properly.

There are three basics speeds, measured in “revolutions per minute (RPM)” – 33RPM, 45RPM and 78RPM. Most record players can play both 33RPM and 45RPM without any problem.

However, if you want to play 78RPM on the same record player, you will probably need a modification kit. Or you will have to buy a different type of record player.

Another important function of the plinth is to reduce and isolate unnecessary vibrations coming from the bottom to the record player. Wood, plastic and metal are all used for making the plinth.

The feet are short legs on which the plinth and the rest of the record player stand. They also reduce a lot of vibration, if they are constructed well.

How Does a Record Player Turn?

The basic working principle of the record player is quite simple. Electric motors spin the wheels – and that’s it. There are two types of power application: direct drive and belt-driving.

The direct drive is when the turntable uses gears and the belt-driving is when a belt is placed over the motor and the belt drive (the central-point axis of a record player).

When it comes down to the basics, everything’s pretty straightforward. But although the record player is a somewhat simple device, it’s sometimes hard to find the right one.

What Makes a Good Record Player?

There are many factors behind the quality of a record player. But it generally comes down to the build. If a record player is constructed well, it will last long and be reliable.

Here are the most important features of a well-constructed record player:

The Quality of Audio Output

There is no point in having a record player if it doesn’t provide audio of exquisite quality. A good record player will pick up the recorded information in its entirety. This way, nothing will get lost and you will enjoy in the best sound possible.

If there is a lot of vibration, the quality of sound coming from the speakers will be jeopardized. You cannot enjoy the music if there is any kind of noise coming thru.

Oftentimes, poorly constructed record players tend to vibrate a lot, and affect the overall sound. It is very important that the best type of material is used for the record player, and that there is a lot of testing for it.

The Right Plinth and Feet

The best way to isolate any kind of vibration is by having the best plinth. There is also the so-called double plinth – and it is probably the best for completely reducing unnecessary vibration. And since the plinth stands on feet – feet on the record player also help in reducing vibration. 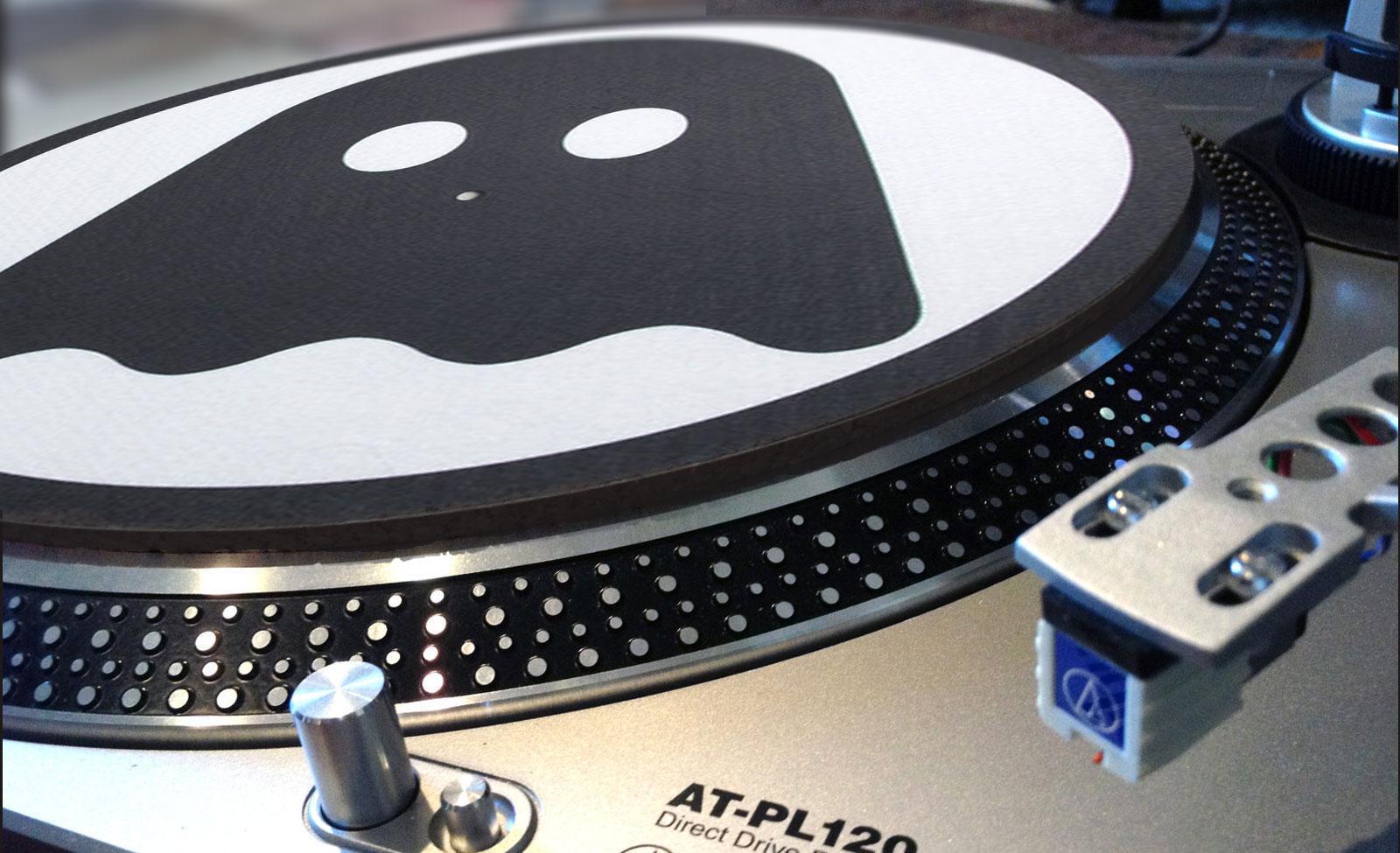 If the platter isn’t heavy enough, it won’t improve upon the overall sound quality of a record player. On the other hand, if the platter is heavy – it will benefit the sound. Heavy platters reduce vibration, but they also do something else – they provide much-needed inertia. Inertia is important because it will keep the speed of a record player steady.

Platters which are lighter often compromise the speed, affecting the quality of audio output. It’s also good to have a mat to reduce vibration. However, if the platter and plinth of a record player are good, then there is no need for the mat – because there won’t be any vibration.

A good record player will have a decent motor that doesn’t produce a lot of noise. The last thing you want is a record player whose motor affect the overall sound. Many engineers prefer using the belt-driving system for making record players. This system actually allows the record player to lessen a lot of vibration from the motor. 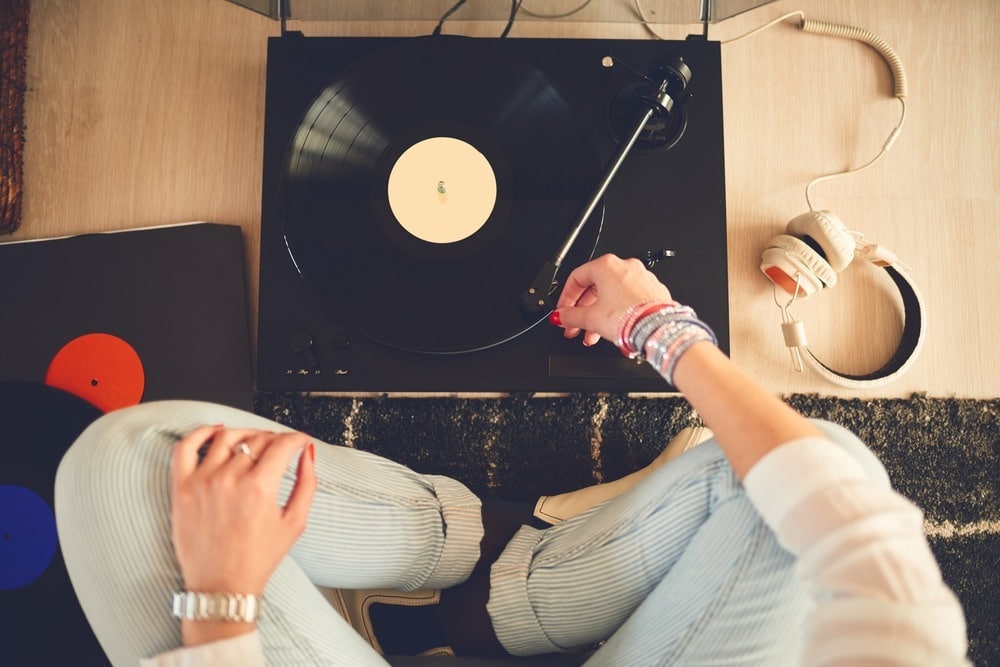 All the parts of a record player should be of good quality. Otherwise, it won’t produce high-quality sound. But there is no way for the parts to be good if they are not made from reliable materials.

Wood, metal and plastic that go into the making of a record players have to be reliable and of good origin. This means that there should be no compromise when it comes to the industry standard. Most major manufacturers of record players use nothing but the best materials for their products.

These are the basics of how a record player works.

In the recent years, especially after the resurgence of record players, many people talk about making them at home. Although this is possible to do, we do not recommend it. There are several reasons for it.

First of all, even if you get the right set of materials, it’s very hard to test the record player properly. Then, there is the question of electric wiring and your safety. Finally, it’s very hard to maintain the industry standard in a makeshift way.

This is why it’s best to buy a record player from a well-known manufacturer.