How Many Keys Does The Piano Have

Most of us know how a piano looks and sounds.

It is a big, acoustic instrument, found in either an upright, semi concerto or grand piano form.

There is also a digital, quite spread version of it – the synthesizer. How many pedals does it have?

It is, alongside the guitar, one of the most popular instruments in the Western world.

Nonetheless, there is one more demanding question about this instrument – how many keys does the piano have?

If you had your doubts, the answer to this question is: it has 88 keys spread through 7 octaves.

However, this, now canonized, keyboard was not the norm up until just a handful of decades ago. So, how did the piano as we know it come to be?

The Remarkable Evolution of the Sonorous Piano

The Early Antecedent of the Modern Piano: The Water Organ

One of the defining if not the prevalent characteristic of the piano is it’s keyboard.

Therefore, it is no wonder that the first instrument to have a keyboard is thought to be the furthest most link to the instrument we are playing today.

That instrument would be the water organ (or the hydraulis).

This instrument was invented in 3 century B.C. by an Ctesibius from Alexandria.

Ctesibius was a true prodigy innovator of the time, and highly regarded in his home town.

The hydraulis he came to develop was both an engineering and a musical wonder.

It gained popularity first in Ancient Greece and, not late after, in Ancient Rome as well.

It was used in all types of festivities.

Sadly, only parts of some remain till this day.

Hydraulis remained popular for several centuries especially in the Byzantine realm, after the division of Rome.

It was here that Arab inventors further improved it’s sound reach and started to build what became known as the hydraulic automata.

This version of the water organ became popular all throughout Europe in the 13th century. It is thought to be the direct predecessor of the organ.

Still, it’ is important to keep in mind that both the hydraulis and hydraulic automata did not have the keyboard we have in mind today.

Both of these instruments were played not with fingers, but with feet and limbs.

The Other Side of Instrumental Ancestry: The Hammered Dulcimer

As noted, the usually quoted predecessor of the piano is the hydraulis.

Still, it would be a great oversight not to mention the importance of the hammered dulcimer for the development of the modern piano.

The hammered dulcimer is an instrument played with a set of two small hammers.

Although this instrument had no keys or a keyboard, the hammers and strings used to produce sound on it are not so different than the hammers inside any piano today.

The hammered dulcimer was hugely popular in the Middle Ages, and can also be traced all the way back to Ancient Greece. 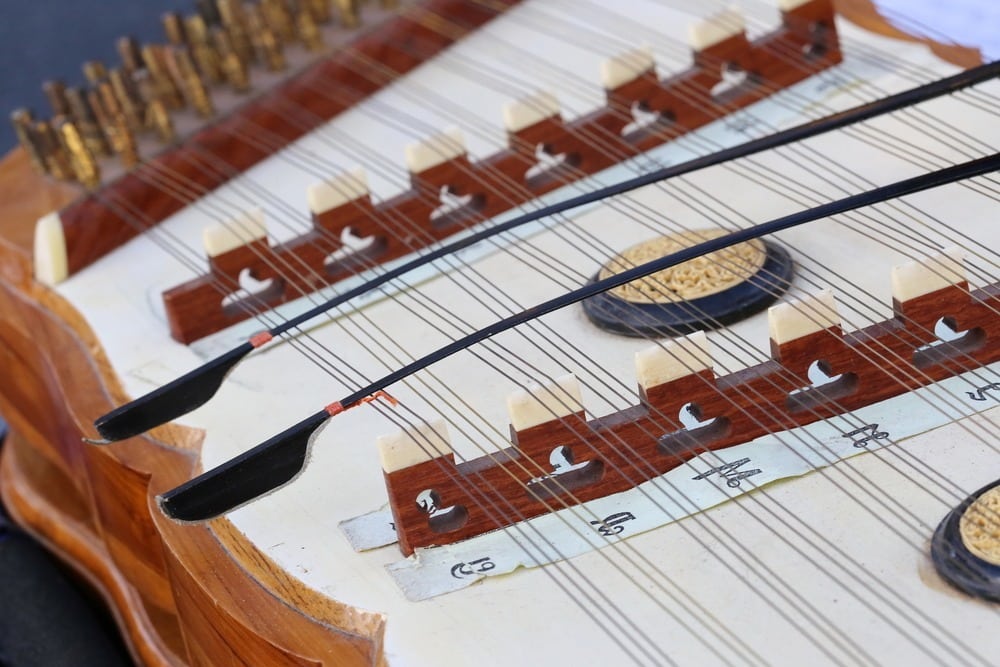 Musical instrument invention bloomed in Europe in the Middle Ages.

So came the two most influential predecessors of the modern piano.

They are the harpischord and the clavichord. 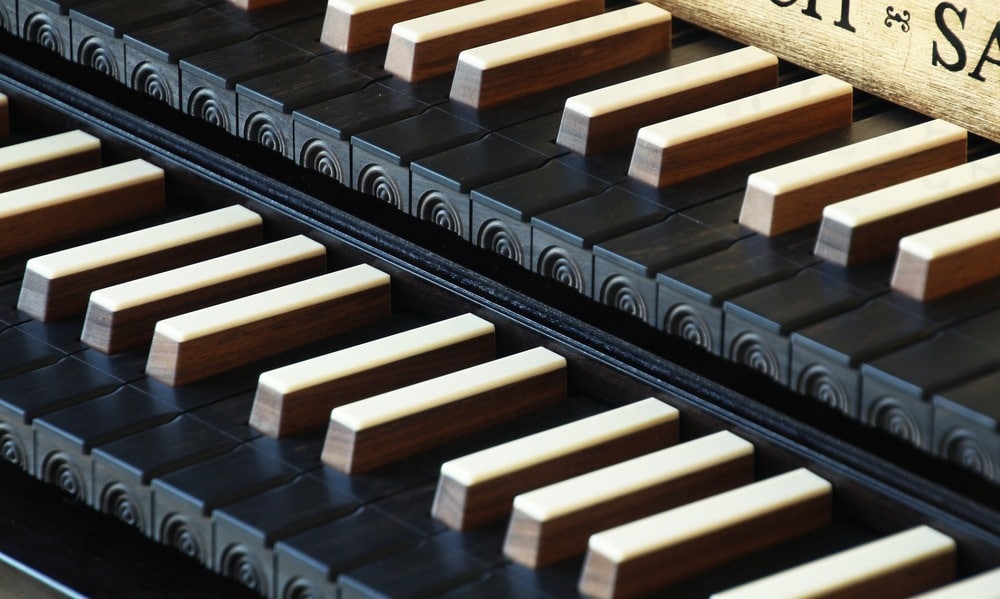 Both of these musical contraptions are in form similar to the piano.

However, they differ in the way the strings are played to produce sound.

Both of them were lacking the ingenuity on the field of sound making and had engineering issues.

On the harpischord it was hard to influence the sound intensity.

The clavichord was invented to deal with this issue, but the sound it produces was rather delicate.

The keyboards on these instruments were also limited to up to four octaves.

There was space for improvement. 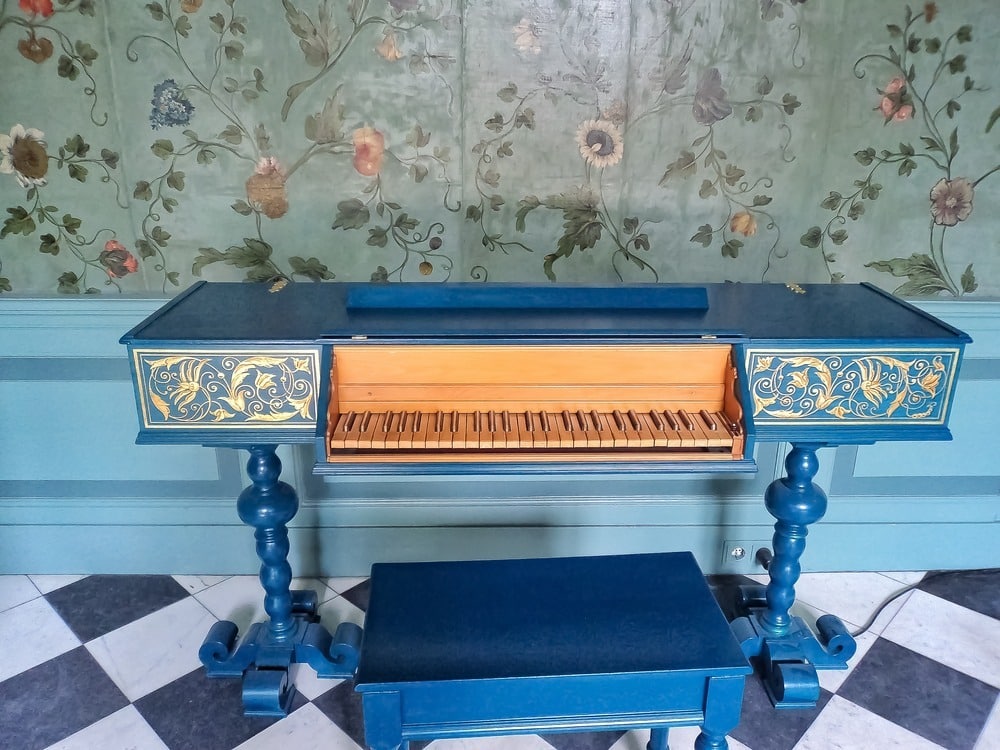 The Father of the Piano: Bartolomeo Cristofori

Bartolomeo Cristofori was an excellent harpsichord player from Padua, Italy.

While working for the Medici family, he learned the technical side of producing musical instruments.

Infatuated by music, he set his mind to developing an improved harpsichord.

Thus, circa 1700, he invented what he called the ”arpicimbalo” , soon to be known as the ”pianoforte”.

There are only three remaining Cristofori pianos today.

How Many Keys Did the Original ”Pianoforte” Have?

The ”pianoforte” had a four octaves span. It ranged from C to c.

Therefore, the total range of this piano is quite small.

Also, originally, the coloring of the keys was inverted.

All of what are the black keys now were white, and vice versa.

Cristofori himself changed the coloring of the keys at one point.

Even between the three surviving ”pianofortes”, there is a difference in key coloring.

Still, if given the chance, a modern day pianist could be able to play on these pianos.

Therefore, it can easily be said that Cristofori set the mold for the now accepted piano keyboard standard. 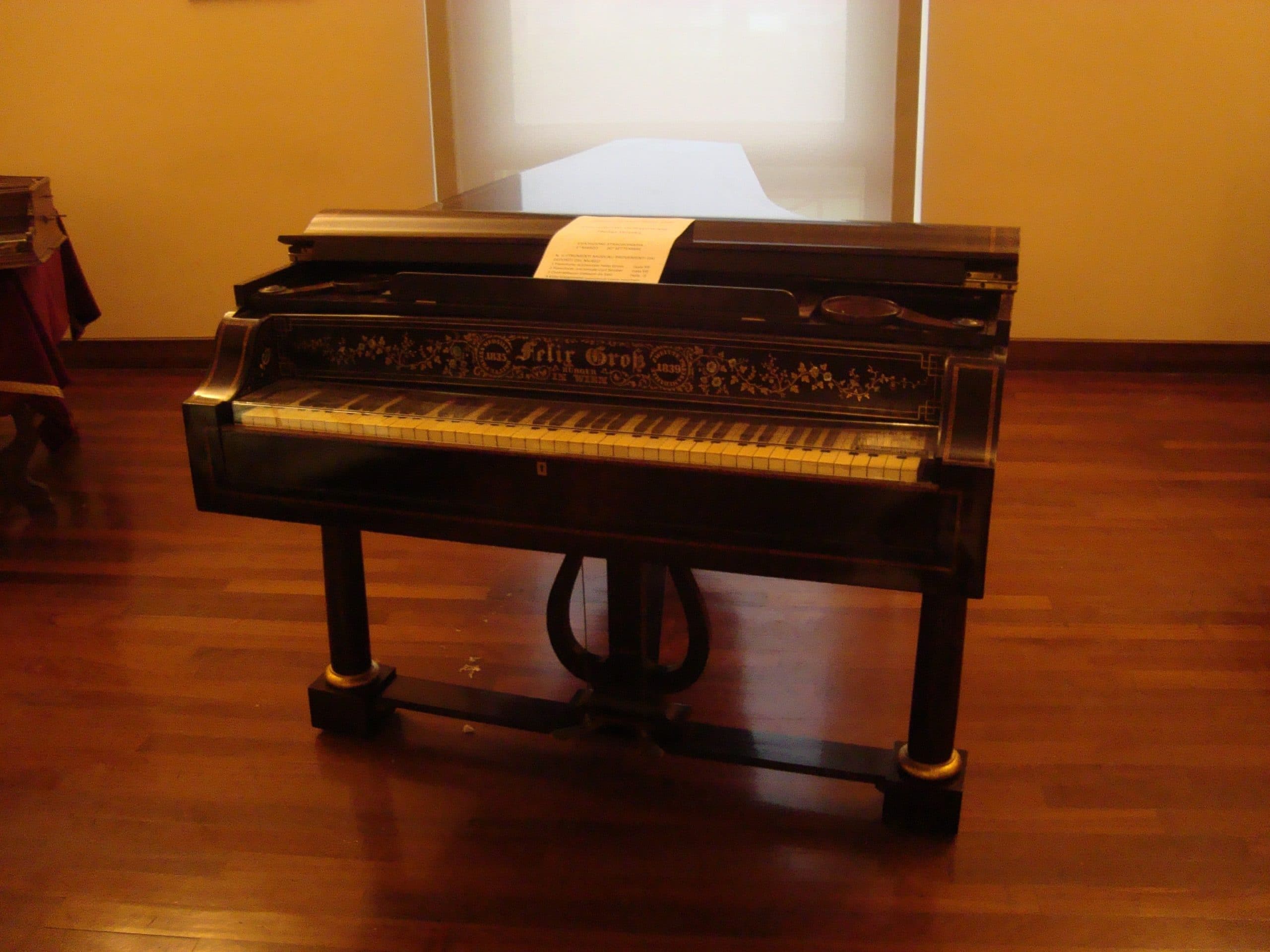 As the piano keyboards developed with even more octaves, a shift in playing technique happened.

Believe it or not, players used to perform with only three fingers, and not using the thumb to perform at all.

The most interesting fact regarding the reformation of piano performing is who implemented and pioneered it.

Finding the six finger norm too limiting for his compositions, he suggested that the use of the thumb and the pointing finger be implemented.

He was the first true piano performer and composer to write music having in mind the use of all ten fingers.

The influence of the Broadwood Piano Makers

One can not talk about the genesis of the piano without the mention of Broadwood.

This English piano maker was the first one to make the grand piano as we imagine it today.

His pianos were the craze of the early 18th century.

They were the first makers to deliver a five octave span.

This was flowed by a six octave span just some years later.

Both the great Haydn and Beethoven played on these instruments.

This is no wonder – the sound Broadwood pianos produced was significantly louder and more forceful. 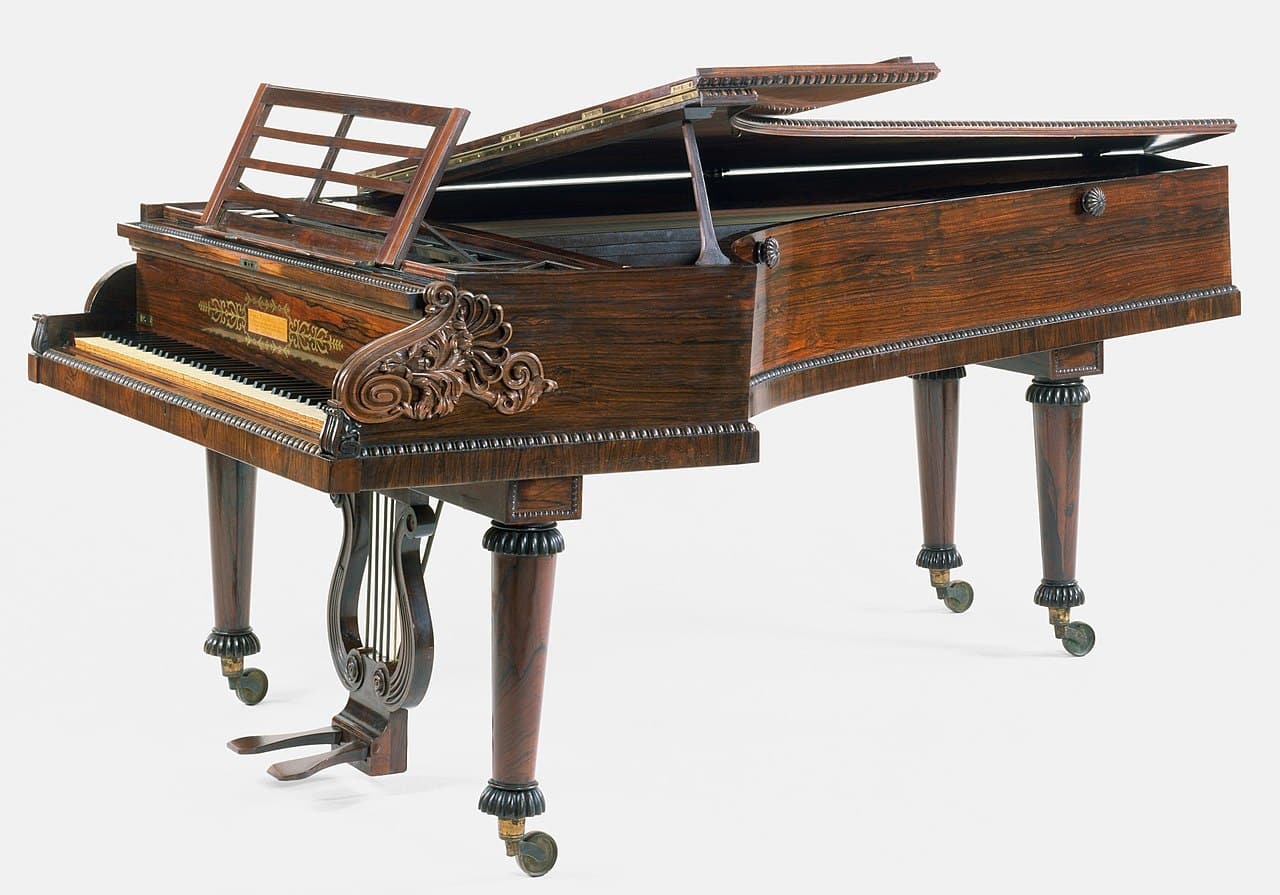 Viennese Keyboard Expansion to the Left and Right

By the late 18th century, the piano became massively sought after, especially amongst the European nobility.

It is then that artisans from all around Europe jumped on board and started making them.

They also made it possible to do some improvements to the keyboard and overall possibilities of the musical reach.

Taking into consideration the power structures in Europe at the time, it is no wonder that piano craftsmanship flourished in Vienna.

The makers such as Stein and Streicher made pianos aesthetically appeasing.

Not only that – they made the almost standardized keyboard.

They, like Broadwood, expanded the overall dimensions of the piano, which made it possible to insert, at first, an octave to the left and to the right.

This made a total octaves count into six.

They also fortified the strings by adding an additional string to the piano.

This made the sound even more durable and voluminous.

Still, their sound was more gentle than the one performed on the pianos from the ”Broadwood school” makers.

This was to some a disadvantage, and to others, a big plus.

In parallel to the ongoing development of the key count, in the 19th century significant changes were made to the very construction of a piano.

Up until then, a piano would be made almost entirely out of wood.

The iron cast piano frame was patented in 1825 by A. Babcock .

This made it possible to use a variety of different strings in production, which was until then simply unthinkable.

Finally, the true richness of sound of the piano was ready to form.

It was in the same time period that another, this time visual, change occurred.

Believe it or not, the usual format of a piano until the mid 19th century was a – ”square”.

Given, it was not a square but rectangle in shape.

This instrument was the one played by almost all of the classical composers was nothing like our grand piano.

Only after the iron frame came to exist did the change in piano visuals happen.

The curve in the piano body was only then made possible.

Therefore, it is no wonder that is soon after became the norm

Uprise of the Upright 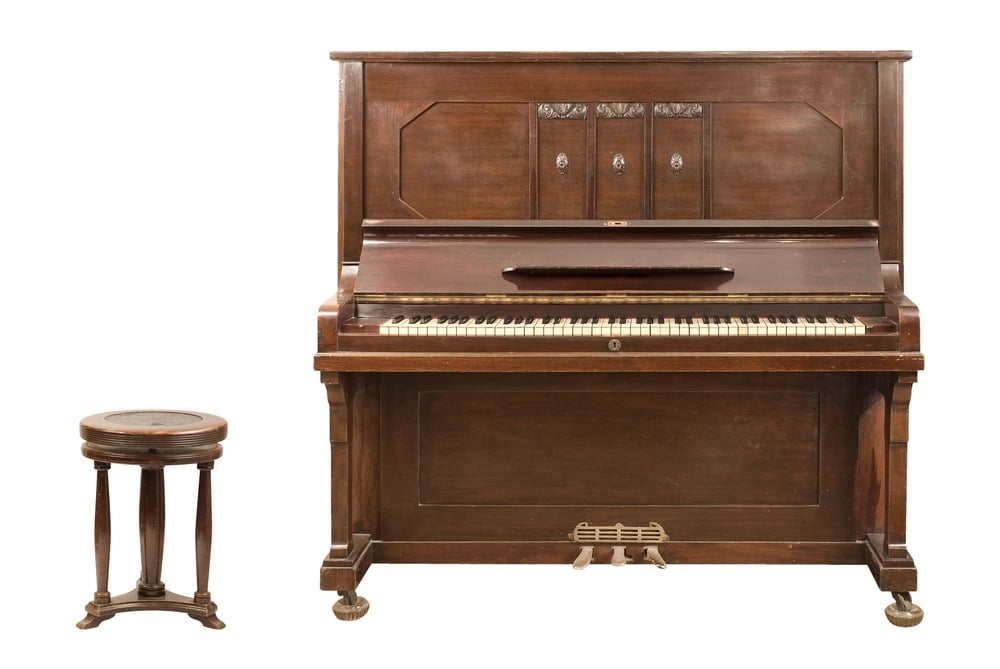 The end of the 19th century saw a shift in piano type popularity.

The upright piano, with it’s smaller body was (and still is) a popular choice amongst most piano players.

With the same abilities like the grand, the upright became the more logical and less costly solution.

It was easier to fit into any space and did not lack in sound quality, so people did not hesitate to get it.

Definite Standardization of the Keyboard

Strangely enough, the final standardization of the piano and it’s keyboard happened in the 20th century.

It was then that the 88 keys, 7 octaves came to exist.

This switch happened by insertion of 3 more keys to a almost a century long 85 note keyboard.

How Many Keys Does the Piano Have?

After all of the various inputs mentioned earlier, we reached the modern day keyboard standard.

Therefore, every piano, made from the 1920’s until now, almost exclusively has 88 keys and 7 octaves. 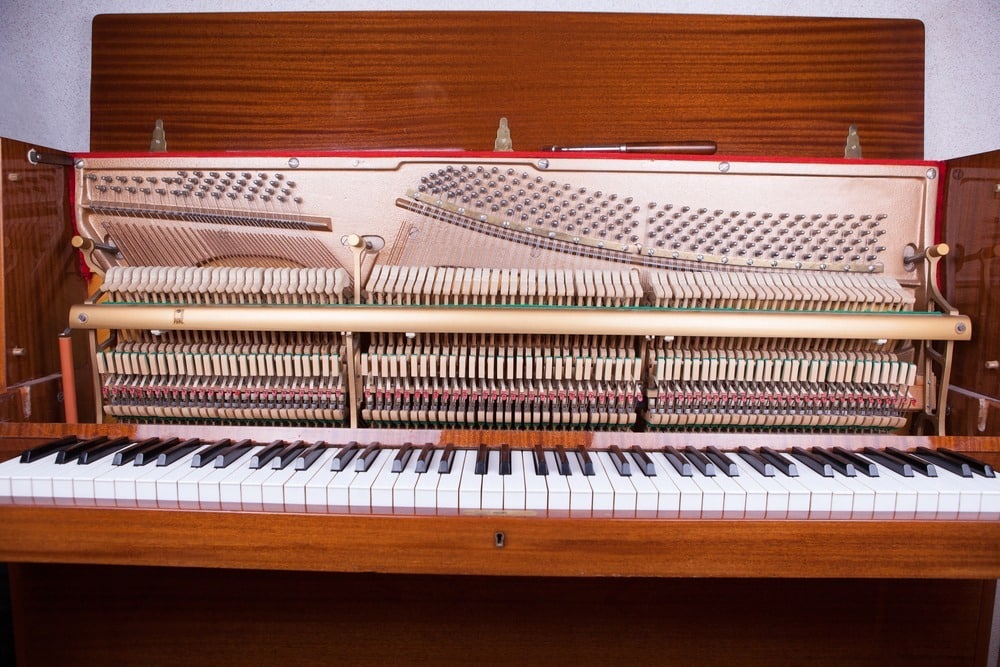 The standardized keyboard allowed a wider spread of sheet music and lead to an unified piano performing front.

The, by then improved, sound possibilities lead to the leap in popularity of this magnificent instrument.

It became a status symbol to upper and middle class people alike, proudly presented in their houses.

Some Significant Exceptions to the Piano Keyboard that Followed

Today, this instrument is so widely written for and overwhelmingly popular.

However, one must wonder, is there a possibility for a new standard?

In the twentieth century, the piano manufacturer Bösendorfer made the Imperial Concert Grand Piano.

This magnificent piano has a total of 97 keys, and is considered to be one of the best instrument to perform on.

Still, as this type of grand piano is well known, we doubt that it will shift the world standard.

It has been and is know for it’s brilliance for decades.

Still, it did not manage to significantly shake the norm on a global level.

Rather, it is seen as a luxurious extravagance.

The Technical Standard to a Piano Keys Today

Even though the standard for a piano is 88 keys, there are still some varying dimensions in piano making.

Some smaller dimensions do exist , like the one developed in the 1970’s by Christopher Donison. 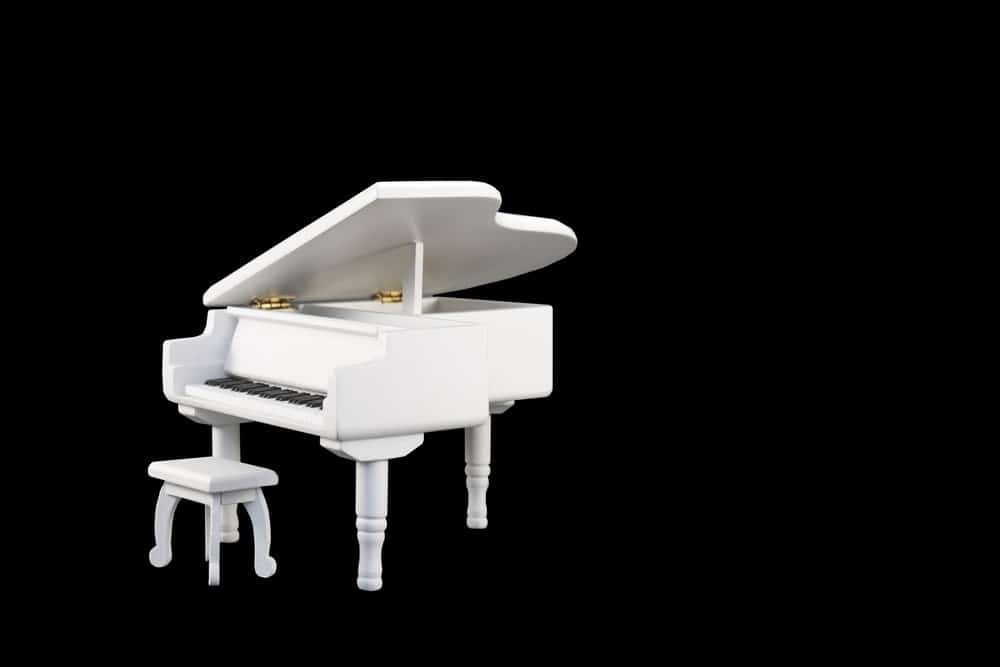 However, they are more the exception than the norm.

Now you have a clear idea of the development of the modern piano and all of the variables in keyboard standards throughout the ages.

The magnitude of differences through time truly goes to show how important this instrument was and is.

It was a slow but interesting journey to the 88 keys we all now know.

Therefore, it’s no wonder that so many people took part in its standardization.

We hope you enjoyed this article.

Please do not hesitate to ask any questions in the comment section below, or give even more insight to this bewildering story of the keyboard and piano standardization.