The Casio PX 560 is the latest addition to the Privia Series. It is functional and versatile so it can be either a stage piano or the one to use at home.

Its price tag is higher than many of its counterparts and other keyboards in the same series, but the features it provides certainly make it a sound investment.

However, the thing you need to care about here is whether this is the one for you. So read on this Casio PX 560 review and find out.

Here are the keyboard specs according to the Casio PX 560 manual:

Now you are ready for my hands-on experience with this keyboard: 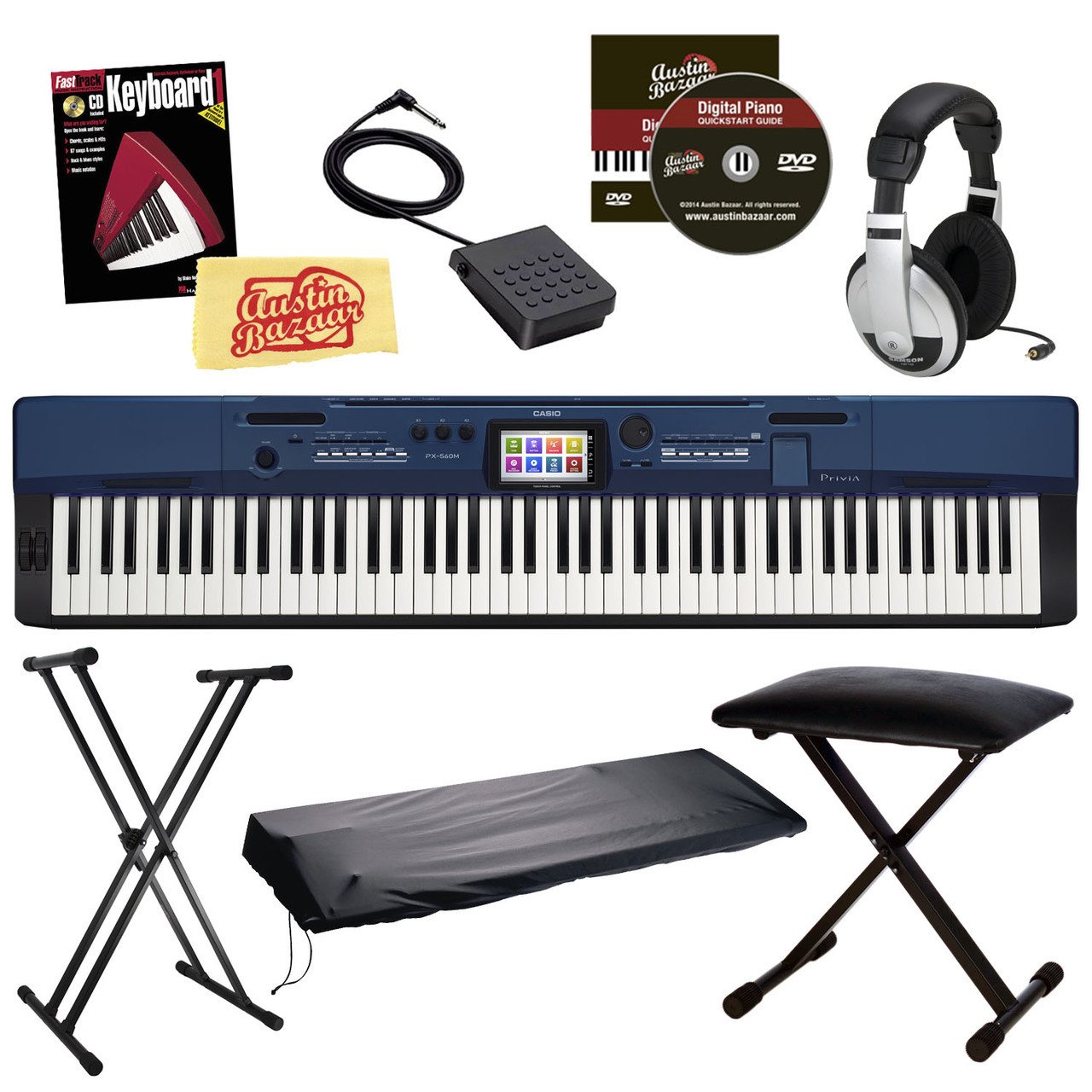 I have been using all sorts of keyboards in the last 6 years. What I tried range from Nord to budget-friendly Casio and many models in between, including this Casio Privia PX-560. Here is my experience with it:

After some time using this keyboard, the sound has never stopped pleasing me.

It does not produce the best sound that I have ever heard but with the price, I have nothing to complain.

I notice that if you use its built-in speaker, the keyboard sounds a little better but the differences are minor. I think this might come down to the fact that the speakers are stereos.

The deep lows of this Casio can beat most of its competitors that come with a similar price. 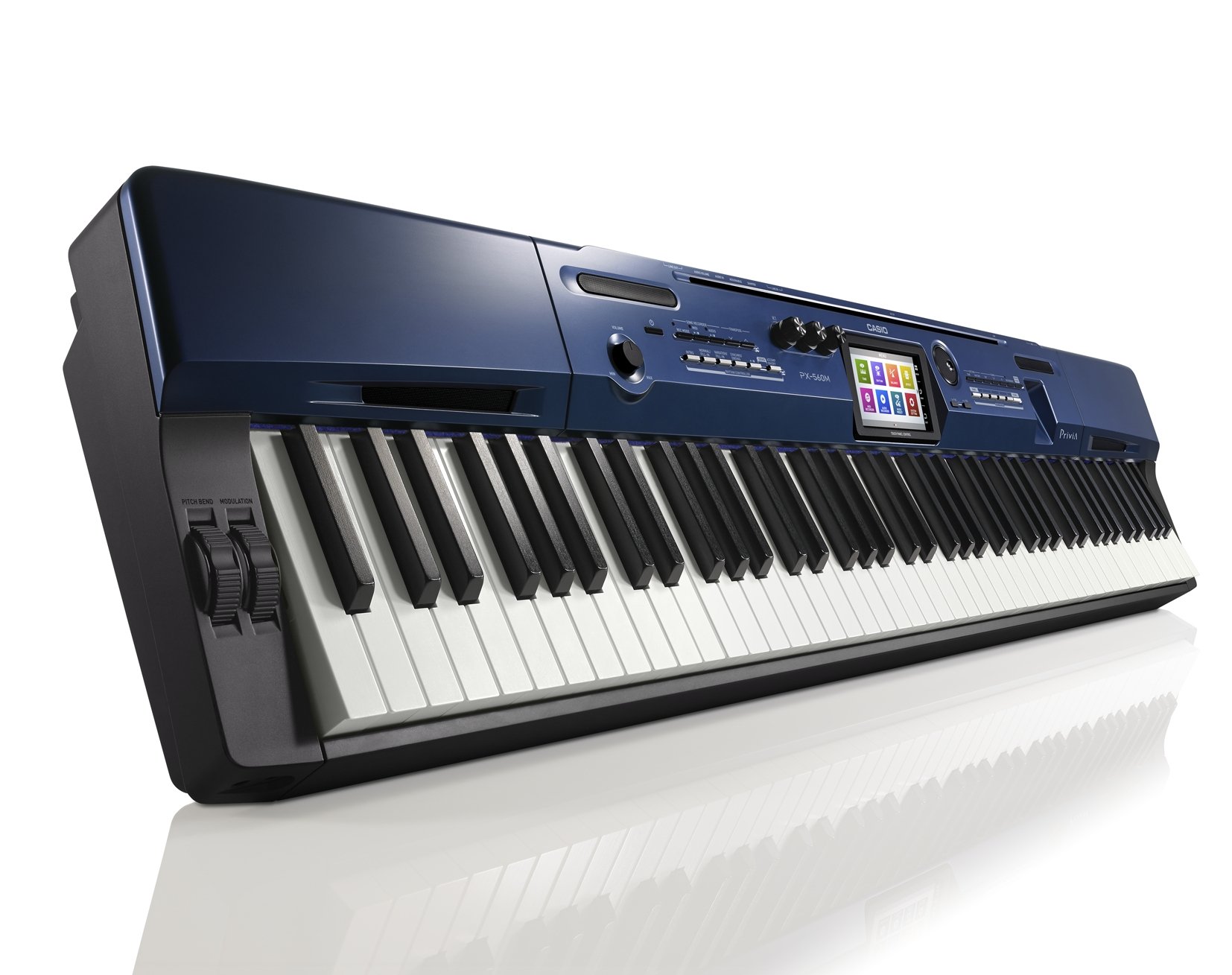 I am more of an old-fashioned person but I have to admit that the touch screen is one of the best features on this piano.

When I compare it with other keyboards that have 2-line LCD or 2-digit readout, this Casio has an edge over all of them.

It allows you to browse all the features faster and easier.

Sometimes the touch screen can take a few seconds to response but a lot of times, it is very responsive.

The interface is decent but not the best. It has already looked and felt a bit old.

​Sound Switching Is A Bit Off

I want a piano that allows me to switch sounds with no interruption in between. However, this Casio Privia PX-560 is not up to my expectation.

You can switch sounds by pressing the selection buttons. There are four buttons that you can press. They contain a wide range of sounds for you to choose from. They are straightforward and programmable.

The only thing I do not like about this feature is that some of the settings take effect right away.

Here is the solution.

Since I cannot change this, I decided to work my way around the problem. Whenever I am with this piano, I try hard to be creative with my sounds and the issue is solved.

For those who are overwhelmed by all the digital things, there are physical buttons on the right. What you have are transpose buttons, metronome on/off, and tempo buttons.

I love the way the keys feel. When I compare it with a Kurzweil, the keyboard of this latter feels like I am playing with a toy.

Do not get me wrong here, the Kurzweil is a good piano in general, but I like the keyboard of the Casio better. 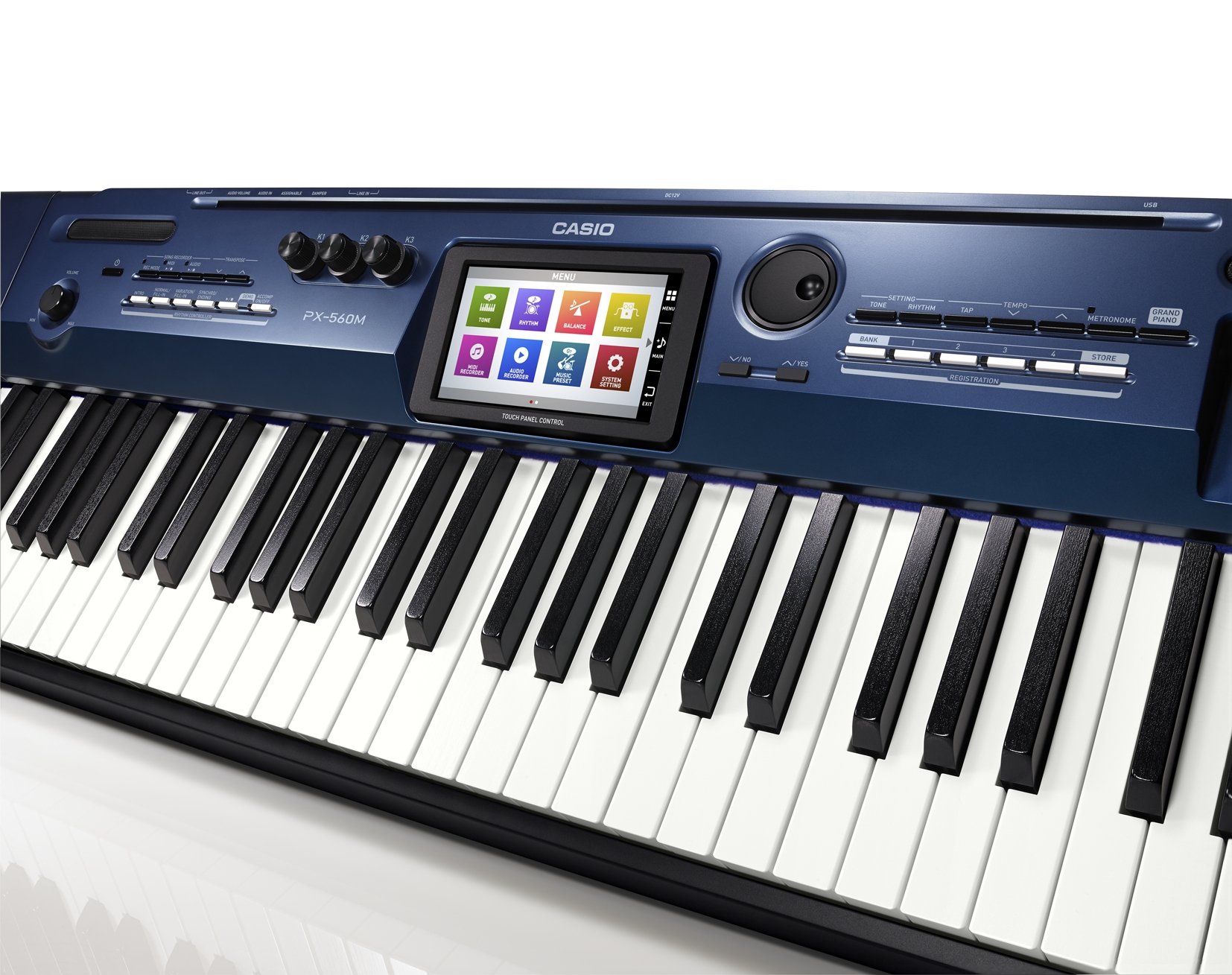 This piano adapts the tri-sensor technology. This is beneficial in the way that the keys do not need to do all the way up to be played again at a different volume.

However, sometimes when you play rapidly, you may notice that they are a little too high. Not a big problem for me though.

I also purchased the built-in stand of this keyboard and it works decently.

However, since the bottom bar looks a bit flimsy, I usually take the piano off and put it in a bow to transport it. You can easily separate the keyboard and the standby fur wingnuts.

Whenever it is on the stand, you can use the ¾” square tubing installed on the bottom for extra support for your keyboard.

Since the stand only holds the two ends, I think this tubing is necessary to keep the keyboard in place. Wingnuts would be nice but they may hit your legs.

Although the keyboard looks well-made and durable, it weighs just about 25lbs.

Other Things That I Notice

The drum and other effects are helpful and fun when you learn different styles. It will set the chords according to what you are playing.

However, sometimes it lags. So if you intend to use this Casio in a one-man band, it may not be a good idea.

But if you just want to be creative with the same old songs, this one fits the bill.

This Casio has all the plugins you will ever need for USB and MIDI. I have tried with an iPhone and an iPad and it works well.

There is a jack for expression pedal and I would like to try this feature for the sound of this keyboard.

Now here is the best part:

If you are both music and tech-savvy, this piano is a perfect match for your ability. I highly regard the programmability. 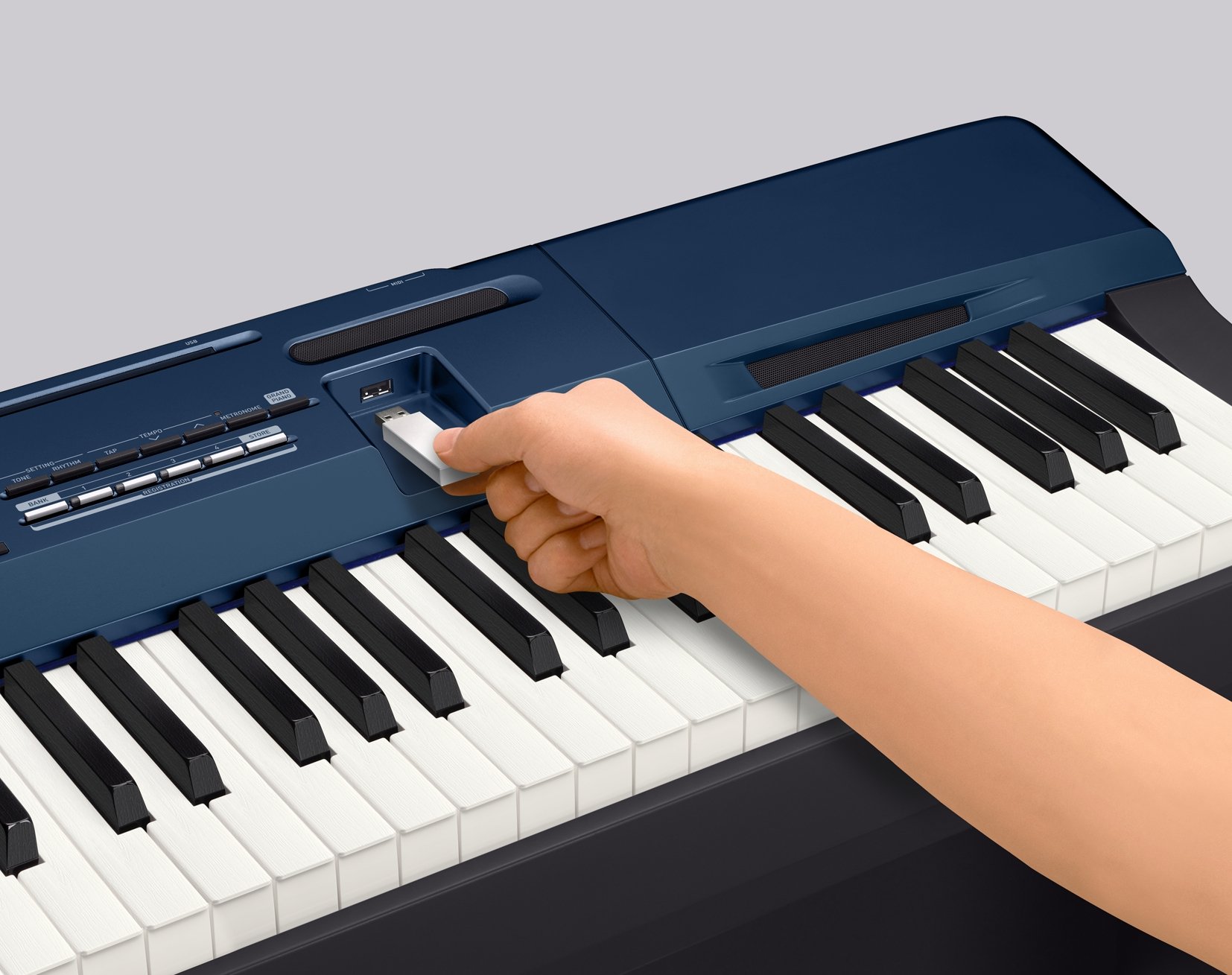 The USB recording is another plus.

With it, you can make a quick recording by either doing a straight recording or a MIDI.

The sequencer works great for laying down tracks.

The damper sound on this keyboard is quite neat and the sympathetic string resonance can be heard when the damper is held.

The Most Prominent Advantages Of Casio PX 560

I have one at home now but the Casio Privia PX 560 is actually a digital stage piano. It can also be used for worshipping, gigs, and theater.

According to my experience with the piano, I usually avoid anything with built-in speakers. I consider anything with this feature an alarming sign. However, this one from Casio is an exception.

I admit that I was skeptical when I first saw its specs online but so many people have had a wonderful experience with it. Even some of my friends recommended it. So I took my chance and purchased one.

That was the best decision of my life.

The 1/8” input allows you to play media whenever you are in a song learning session.

With this Casio with you, you do not have to bring along a set of speakers when you practice with vocalists only.

The speakers are loud enough for my needs.

If you need to plug it to a mixer, this one can do it with ease.

However, please bear in mind that the speakers will not go off automatically so you will have to do it manually. 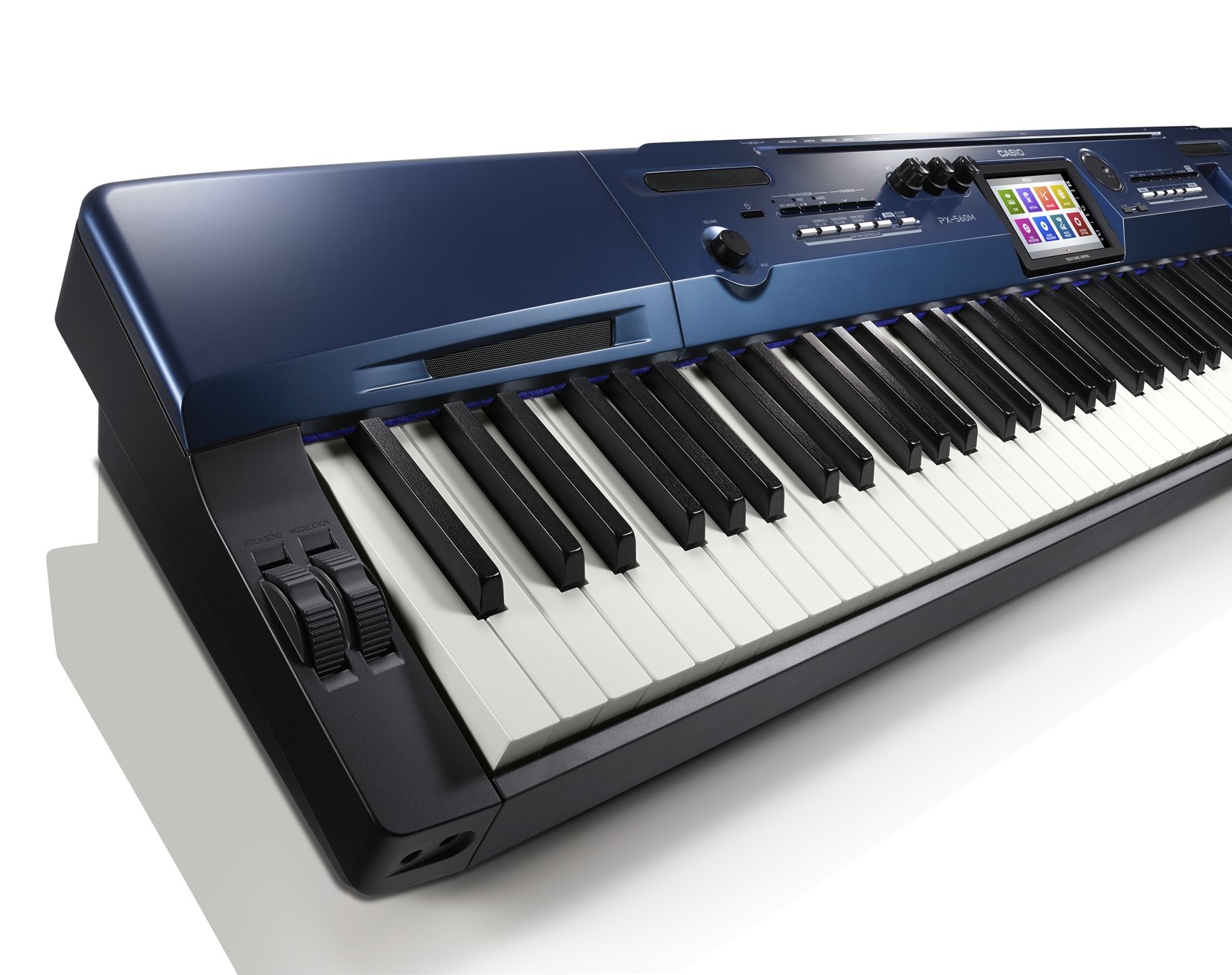 ​The Casio PX 560 In Comparison With Other Models 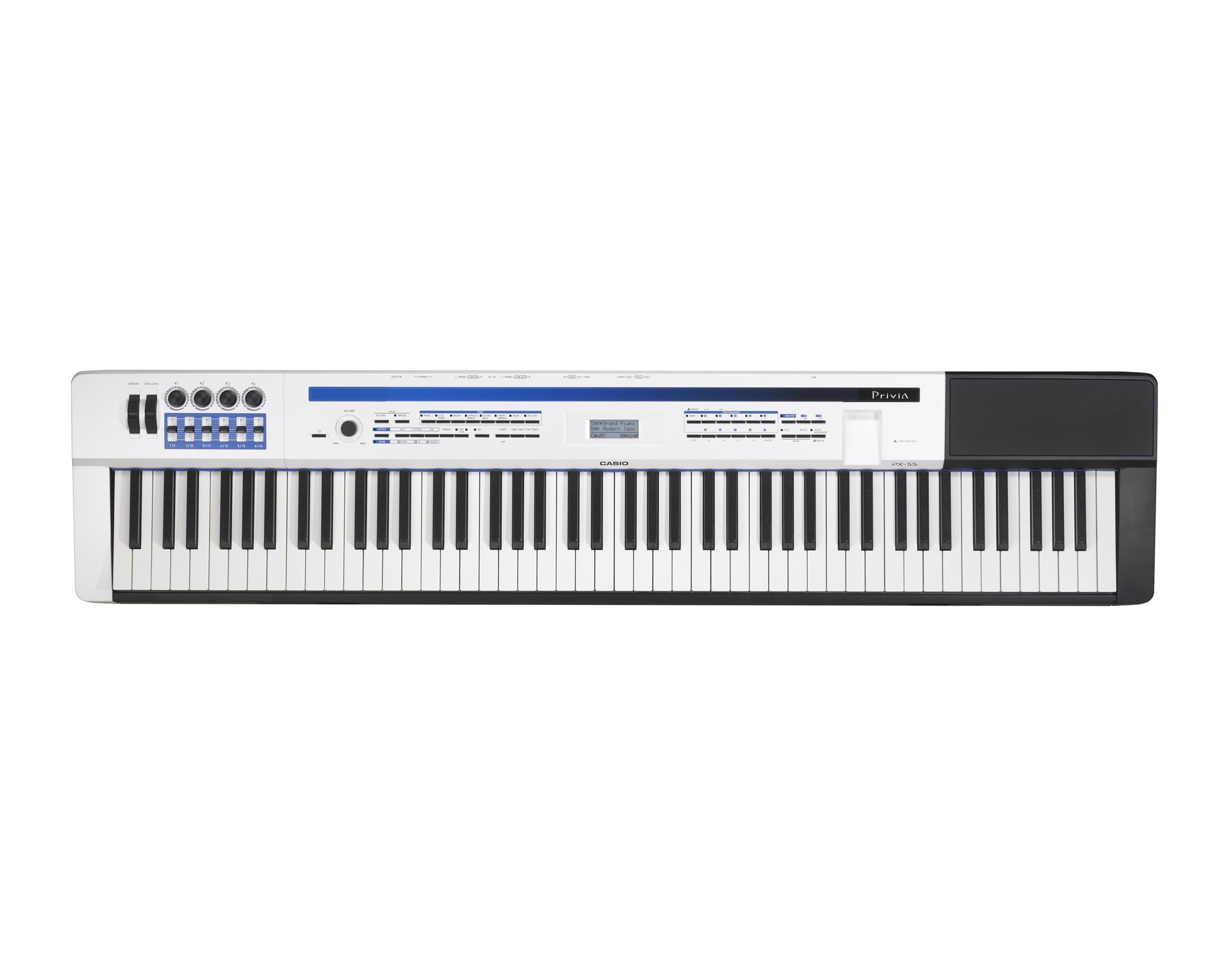 The first thing I notice in both models is that there is no “solo synth” mode (monophonic lead synth).

This does not mean the PX 5S and the PX 560 cannot produce lead, thick sound but the trick you can perform with the XW-G1 or XW-P1 is not available.

I want to make it clear so that you do not get confused.

Here are some of the main differences:

Both are great in their own ways. The decision of which one to choose depends on your preference.

According to a test I conducted to compare these two keyboards, when it comes to key action, the Casio PX 560 has an edge over the Yamaha DGX 660.

However, the latter is more versatile and can suit a wide range of needs.

If you sing, you can play (with effect), sing, and record with the Yamaha.

​The piano purists may prefer the sound of the Casio over the Yamaha. If you are not one of those, you may find the letter a more entertaining keyboard.

They do not have much of a difference in size or weight but the PX 560 offers more features than the PX 360.

In the PX 560, you have more voices to play around with.

Here is the kicker:

If you usually have to handle complex pieces, the PX 560 is obviously the wiser choice.

The sound quality is also better in the 560, but people with trained ears have more chances of noticing this than a typical person.

The difference in price is large so if you have untrained ears, it may not worth paying more to get the PX-560. 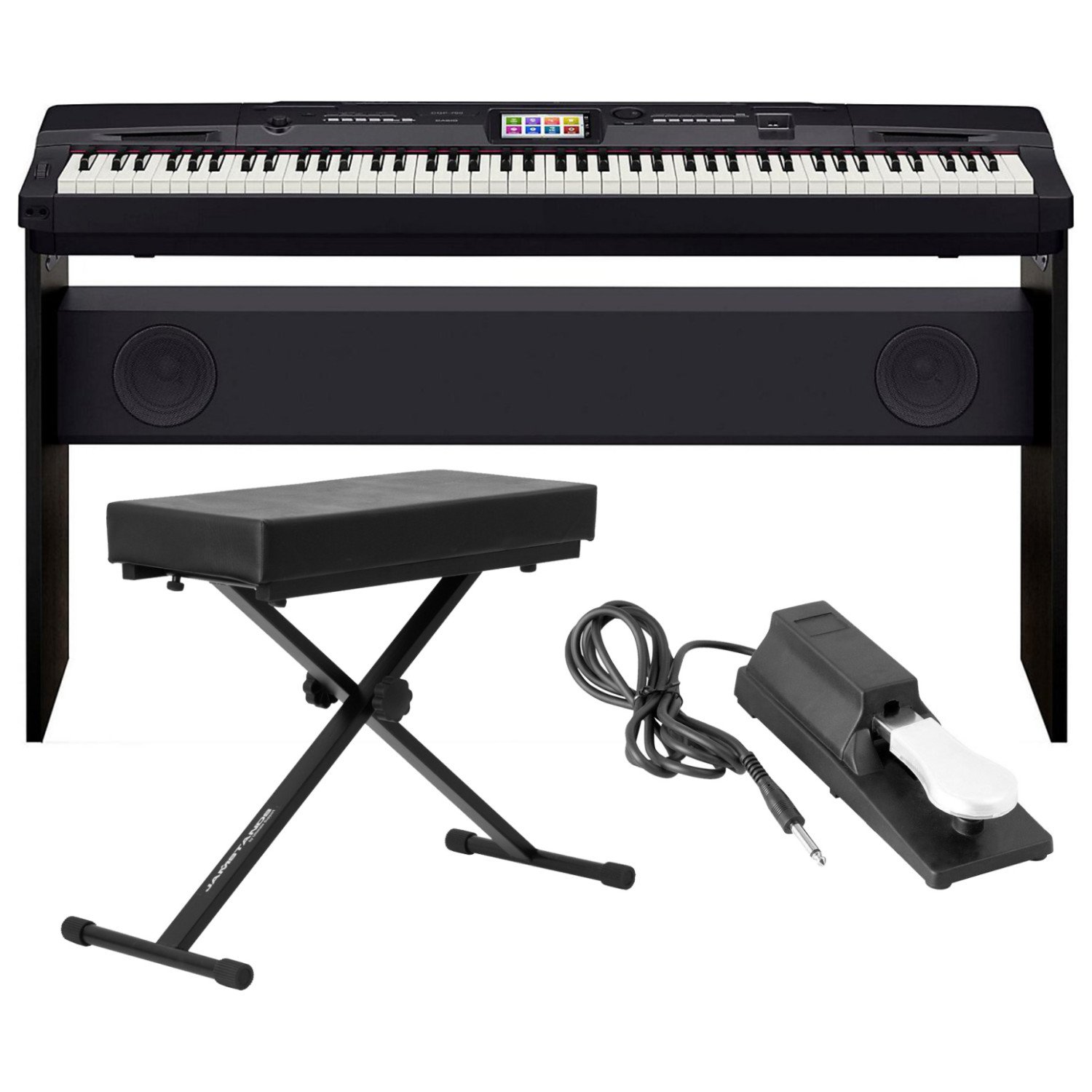 If you put this two side by side, you will notice that their touch screens start out the same way.

In the effect section, you can see that there are three extra icons on the PX 560.

The PX 560 has everything a CGP 700 has plus the Master Comp Edit, Master EQ Edit, Acoustic Stimulator, SysFX Bypass, MasFX Bypass, and DSP Bypass.

In the tone section, the CGP 700 does not have the arpeggiator as with the PX 560.

Another difference is that on the latter model, there is an edit button that allows you to adjust all the parameters.

With balance, there is no line in volume choice in the CGP 700.

The two models have the same MIDI recorder and audio recorder but on the PX 560, you can edit the music preset, which you cannot do with a CGP 700.

If you are listening through an external sound system or a headphone, expect to notice even a bit of better sounds from the PX 560 than that of the PX 860

The reason here might come down to the fact that the former emulates the key release velocity and damper noise, which the latter does not.

However, the Casio PX 860 will definitely outpace the PX 560 when you listen to their sounds through inbuilt speakers.

The reason here is that the former has a 40W sound system and also extra speakers on the stand.

The sound differences might come down to the dissimilarity in the pedaling action, more specifically the stock forms. 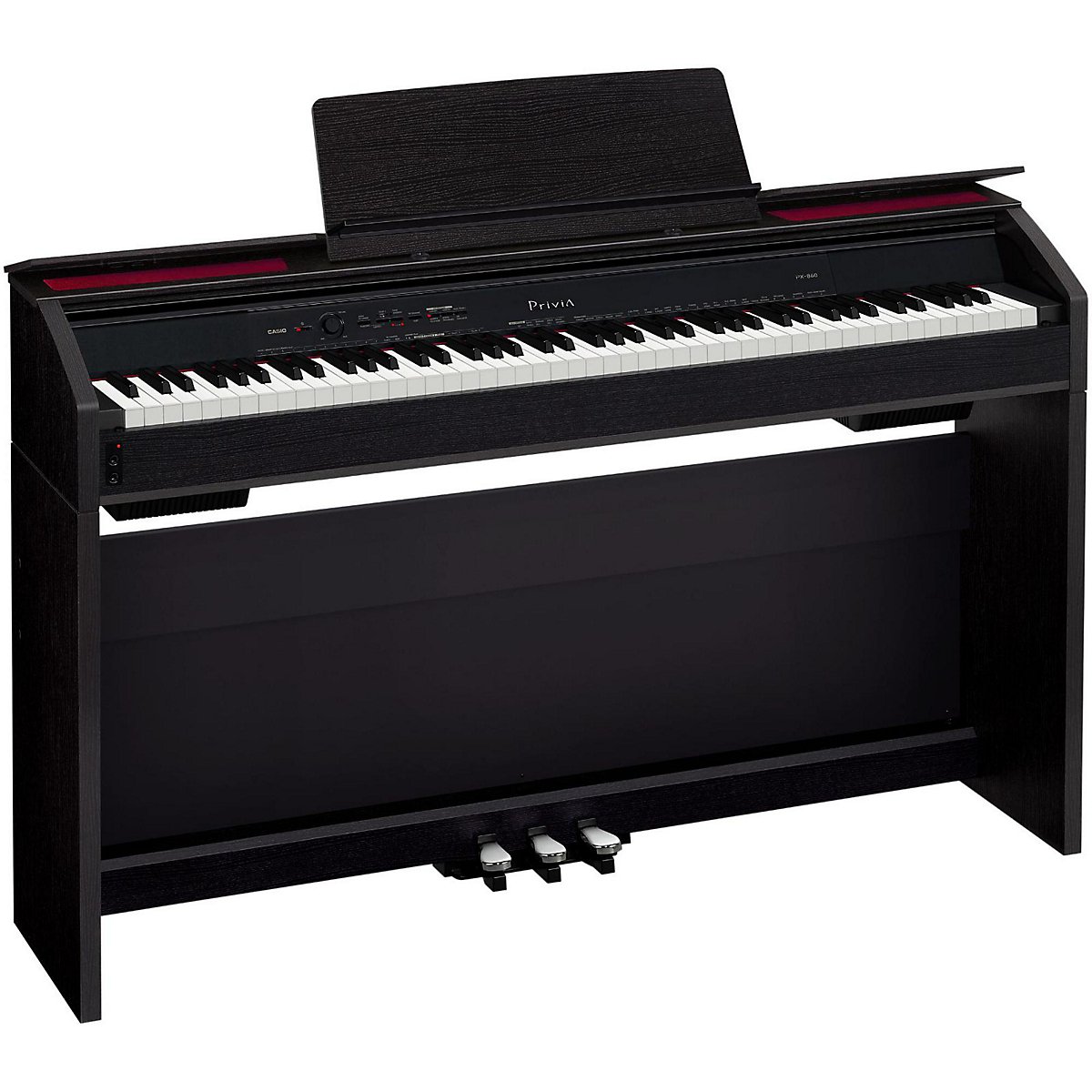 ​The PX 860 features three pedals with half-pedaling supported by damper pedal. While on the PX 560, there is a damper pedal but it does not support half pedaling. Check here for the Casio Privia PX 860 detailed review:https://fireinsidemusic.com/casio-px-860-review/

This piano provides good value for money. Of course, it is not a perfect one, but there is no such thing as a perfect piano so the thing I care about is whether it deserves what I pay for it.

The answer to this question is yes. When you consider the Casio PX 560 price, it is no doubt, the best in this range.

That’s all my experience with the Casio PX 560. If you have anything to add or an idea of a good model that I should try next, feel free to let me know down below.